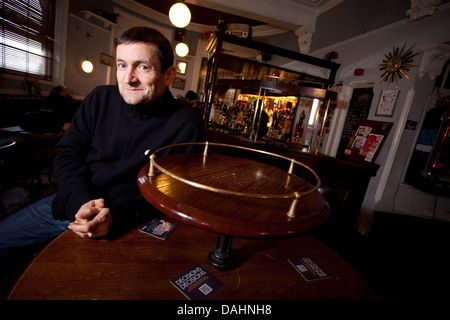 To celebrate his 60th birthday, musician Paul Heaton put £1000 behind the bars of 60 pubs across the UK and Ireland on Monday for his fans including two in Sheffield – his childhood home city.

The announcement was posted on Facebook over the weekend by Heaton with a list of all 60 pubs chosen, including the Lord Nelson and Riverside Kelham in Sheffield.

He said “The hope is to bring people together on the day, whilst recognising that many folk who bought my records or showed me support over the years, could do with a wee party, as we come out of Covid and hit potential financial struggles.”

The gesture brought much needed business to the two pubs on Monday after the hard hitting effect Covid has had on hospitality in the past two years.

Matt Kuinlam, 35, General manager of Riverside Kelham, said: “We’ve had a busier Monday than usual and bills have gone up.

“Everyone is pleasantly surprised by the kind gesture especially after hard financial times with Covid.”

On the side of the Riverside Kelham pub is a neon sign quoting one of Paul’s lyrics, ‘Don’t do all the talking, let love speak up itself’.

Originally Heaton had planned a bicycle tour across the UK and Ireland, visiting and performing at 60 pubs but the pandemic meant this was not possible.

Fans and pub drinkers praise Heaton’s generosity as they enjoy a drink on him with families and friends.

Darren Wortley, 54, carpenter, said: “He’s just a northern lad who wants his fans and community to have a drink on him and I think it’s great that he’s still in touch with his roots.”

Heaton was born in Bromborough, Cheshire, but was raised in Sheffield throughout his early childhood.

Paul Heaton is known for being a member of the band ‘The Housemartins’ and their most famous song Happy Hour .

“He was also one of the first artists to offer a free concert for NHS staff at the start of covid and it just shows that he’s in touch with the real world and reality.”

Heaton is currently on tour in Ireland with bandmate and former Beautiful South member, Jacqui Abbott.