The Nether Edge Active Neighbourhood Plan, which began week, has come under fire by residents and opposition parties due to a lack of consultation.

The plans were created to help reduce traffic, create safer streets for walking, and make a nicer place to spend time outside within the area, and starts a six-month trial period this week.

Green councillor Douglas Johnson, Sheffield City Council’s Executive Member for Climate Change, Environment and Transport, said: “Essentially this is about encouraging a shift from a car-based society to one that has space for everyone, including those who don’t have cars, such as children.

“We have to remember we are in a climate emergency – and there are many other reasons to encourage and enable the shift from private motoring to other forms of travel in local areas.”

However, many residents are unhappy with the lack of consultation proposed before the scheme’s announcement.

168 people took part in a recent survey produced by the Nether Edge and Sharrow Labour Party. Over 70 per cent of people who took part said they were not informed of any consultation in time to take part. Additionally, 78 per cent have concerns that they weren’t able to share during the consultation period. 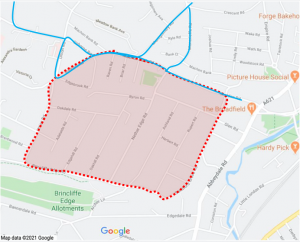 The area covered by the Nether Edge Active Neighbourhood Scheme

Calling for consultation and a delay, the Labour candidate for councillor in the ward, Nighat Basharat, has written an open letter to Coun Johnson, in which she said: “Many residents have significant concerns about the specific measures included in the plan at present.

“The official consultation offered no opportunity for the majority of residents to share either these concerns or their constructive suggestions for improvements.”

Coun Johnson argued that feedback was received from over 300 people including 250 responses to an online survey with this feedback shaping the plans and emphasises this is only a trial. Only 26 per cent of the people who took that survey were said to be residents.

Although Ms Basharat has called for the scheme to be delayed, work on the Nether Edge Active Neighbourhood plan looks to move on, with contractors installing equipment next week.