Policing of Sheffield protest to be reviewed after alleged violence 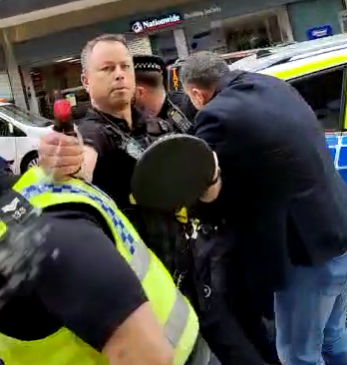 A review into alleged police violence at a protest in Sheffield has been announced by the South Yorkshire Police and Crime Commissioner.

The South Yorkshire Migration and Asylum Action Group (SYAAG), in conjunction with Sheffield Kurdish groups, organised a demonstration in solidarity with Kurdish people in Iraqi Kurdistan on Sunday afternoon.

However, the protest turned violent when members of the police began ‘hurling people to the ground and hitting people around their heads’, according to the statement made by the SYAAG.

The SYAAG claimed that several protesters were pepper sprayed by the police, including a teenage girl.

We are shocked at the police violence today during a peaceful protest in Sheffield in response to recent invasions by Erodagn’s government in Kurdistan. Kurdish flags were ripped from protestors’ hands, who were then beaten and pepper sprayed when they tried to retrieve them. pic.twitter.com/ss4HDD0jK4

The altercation began after police confiscated flags from some of the attendees, refusing to return them due to an investigation into whether they ‘supported any proscribed organisation’.

South Yorkshire Police and Crime Commissioner, Dr Alan Billings, said: “I have had a number of people contact me to protest about the policing from this point onwards.

“As a result, I met the Deputy Chief Constable this morning and he has agreed to review the police response.

“Over the next few days CCTV will be collected from around the area and the whole incident examined.

“I urge those who are expressing strong views – especially those who were not themselves present – to await the outcome of the review.” 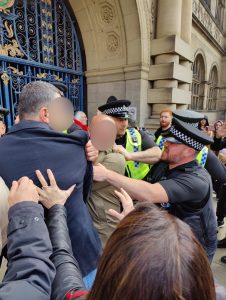 The Sheffield Trades Union Council also lodged a formal complaint against the police, and a statement from the SYMAAG read: “SYMAAG has, over the years, organised hundreds of peaceful demonstrations outside Sheffield Town Hall.

“This is the first to be systematically violently broken up by South Yorkshire police.

“It is intolerable that a peaceful crowd with families with tiny children gathering on a sunny Sunday afternoon to celebrate their Kurdish identity and to protest the invasion of their country were assaulted by their own local Sheffield police.”

We can now begin to release more footage from yesterday’s protest. In this video you can see a peaceful protester being taken away from the protest, whilst those trying to support him are beaten over the head and pepper sprayed. Amongst those pepper sprayed was a teenage girl. pic.twitter.com/FdnklmU4cF

Those in attendance claimed that the atmosphere has originally been peaceful until protesters asked the police to return flags that had been confiscated. 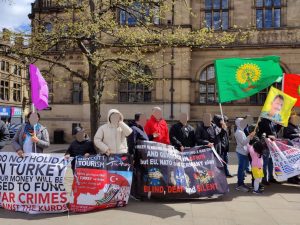 The protest was in response to the region of Iraqi Kurdistan recently being invaded by the Turkish army.