Sheffield Eagles Rugby League club continue their search for a venue for their forthcoming home games amid ongoing building work on their new ground.

The Eagles secured the use of the Featherstone Rovers home ground, Millennium Stadium, for their challenge cup game against Hull FC on Saturday March 26 but doubts still remain over their April home games against London Broncos and Newcastle Thunder.

Mark Hannigan, commercial director at the club, said: “Fortunately, we have a lot of contacts we can call on within the game and other venues are very accommodating.  It’s not easy or ideal but we have places to play.”

The club signed a deal in January to move into their new ground at the Olympic Legacy Park in Don Valley, for their game on April 15 but they have had to delay due to minor construction issues. 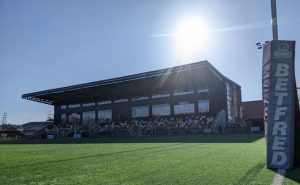 Mr Hannigan said: “It’s been a long time since we had somewhere to call home. The first game can’t come quick enough for everyone at the club.”

The red and gold side have faced a barrage of away games in the opening months of the season but seem to be coping well with the long-standing, uncertain times.

Having not played a game in Sheffield since 2019, the South Yorkshire team are more than used to competing on the road and every single game this season has taken place officially away from home.

The new ground will be on the site of the old Don Valley stadium, which played host to the Eagles for over ten years.

Since its destruction in 2014, Sheffield Eagles have played in five other temporary venues in order to meet Rugby Football League seating regulations including local rivals Doncaster at the Keepmoat stadium.

A club spokesman said: “Whilst we understand the frustrations which have appeared on social media, this is a short term situation and we look forward to playing at the Community Stadium at the Olympic Legacy Park shortly.

“We are doing everything we can to facilitate our home games against London Broncos and Newcastle Thunder. Further information on these will be available soon.”

The club currently sit sixth in the Betfred Championship and have four wins in a row.

Saturday’s opponents play their rugby in the division above, the Super League, and previously won the tournament in both 2016 and 2017.

This will be a tough test for the Eagles, stadium issues aside.