A Sheffield Christian organisation has embarked on an ongoing demonstration outside the Royal Hallamshire Hospital with the hope of ending abortion in Sheffield.

The initiative was started by an internation 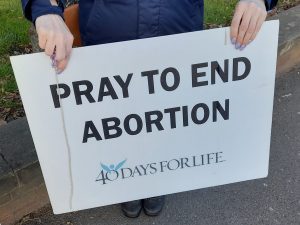 al group, 40 Days for Life, whose Sheffield members will be praying everyday outside the hospital for the duration of Lent.

Ronata, an anti-abortion demonstrator (who refused to give her full name), said: “Personally, I am a mother and it is just heartbreaking that there are mothers in such a dire situation that they think killing their child is the only option.”

The Royal Hallamshire hospital has been targeted specifically as it is the largest provider of abortions in Yorkshire, according to the activists.

Many women worldwide require abortions, unable to cope with the reality of motherhood due to circumstances outside their control and abortions can improve a mother’s quality of life.

Kylie Harrison, global communications manager at Marie Stopes International said: “It’s unthinkably cruel to harass someone while they are accessing a very sensitive medical service at what can be a very difficult time. We are very grateful to councils like Ealing and Manchester that have introduced Public Spaces Protection Orders around our clinics.

“However, the right to access abortion care safely, in privacy and with dignity shouldn’t be dependent on where in the country you happen to live. It’s time for the government to stand up to the tiny but loud minority of anti-abortion bullies. Hounding people while they try to access medical care should quite simply be against the law.”

Abortions have been legal in England and Wales since 1967 and are largely accepted in society under a range of circumstances.

Rachel, one of the main organisers of the movement, (who also refused to give her full name) said: “I am here to make people aware of the other options that exist… to save unborn children.”

In some cases, childbirth could be dangerous for the mother and baby and many people are pro-choice.

The movement began on the March 2 and on Sunday, March 6, two women stood holding signs on Glossop Road.

40 Days for Life prepared a statement summarising their beliefs, aims of the prayer and explaining their legal coverage.

“The police are also very clear about our activities: that it is legal to pray in a public place, and that our rights are protected by law. If at any time our behaviour involved intimidation or harassment, there will be appropriate action.”

The group also has a code of conduct regarding communication with passers by and hospital workers demanding that participants are ‘calm and polite’, even if aggressively challenged.

“We do not judge anyone, we do not harass anyone, and we do not intimidate anyone.”

The group aims to have people praying everyday, from 8am until 8pm, until April 10.