EXCLUSIVE VIDEO: Nightclub manager says they are victim of a witch-hunt after mobile footage is leaked showing brutal bouncer brawl 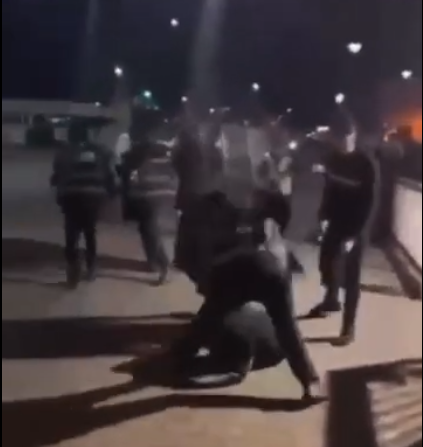 The manager of a Sheffield night club has spoken out after a video showing a violent punch up between door staff and punters was leaked online.

Tank nightclub faced heavy criticism on social media after mobile phone footage of a brutal fight between bouncers and teenage clubbers on February 15 was posted on instagram.

But manager of the club, Richard Dyson, 49, said: “We really feel like this paints Tank in a really bad light and like we’ve been made the subject of a witch hunt.

“The bouncers, who were out of order, were suspended immediately, but what the video doesn’t show is how they were assaulted too, and how the group of lads started the fight in the first place. I know how it looks but these things really need to be taken in context.”

The video shows multiple 18 year old boys being punched to the floor, and continually hit while they are down.

An unnamed club goer has called the incident “abuse of power at its finest”.

“Six bouncers were completely sober giving near brain damage to two potentially pissed up 18 year old uni lads, barely able to defend themselves. It’s over f**k all. One lad at the end of the video is checking on his mate and gets nailed on the head for no reason at all. They absolutely love it. This needs action.”

Mr Dyson added: “I’m devastated that this makes Tank look so bad when we’ve always worked so hard to look after our students and club goers and have won industry awards for our safety.

On the night in question, a group of about four lads were behaving like idiots in the club and were asked to leave for the safety of everyone else. They started a fight with the door staff and it escalated. We called the police ourselves straight away and safely escorted people out of another exit. We will work with any investigations – but the police have confirmed no charges are being brought.”

Since the video was circulated, there have been a number of separate allegations made against the bouncers working in the club, but police investigations have been shut down due to a lack of evidence.

He said :“We hire our door staff from agencies that have worked with us to take action immediately. They’ve been painted really badly, when actually they get subjected to nightly abuse, being spat at, and assaulted so much so they wear body cameras to protect them.

This is an isolated incident. We have tens of thousands of people through the door every year, and this was a one off.”

South Yorkshire Police have said: “Words of advice have been provided to the suspect and the investigation has now been closed in line with the wishes of the victim.”