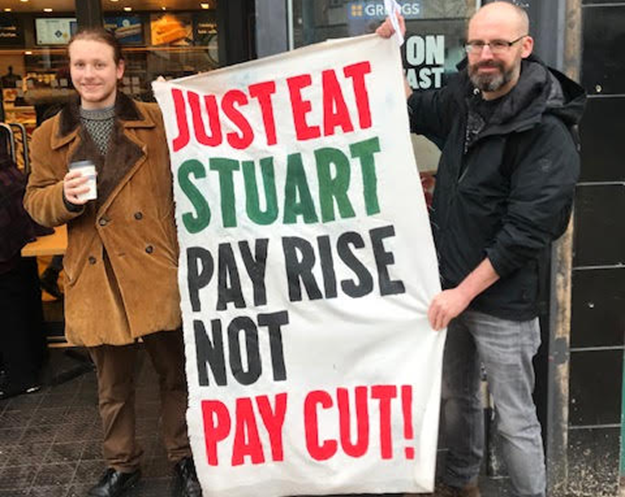 They have currently been striking for over 75 days.

Luke Azenchun, 51, a striking Stuart Delivery Driver, said:  “We started in December and we will never give up until we see a change.”

Strikes are being directed against Stuart Delivery, a logistics company working for Just Eat, after driver pay systems were changed in December.

Drivers claim this new system has slashed by pay per delivery to almost 25% from just £4.50 to as low as £3.41, rates drivers argue are criminally below minimum wage. 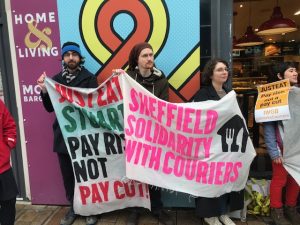 Strikers standing outside of a Greggs in the centre of Sheffield

“The ongoing action by a small number of couriers does not represent the sentiment of the couriers we interact with on a regular basis.”

Stuart holds weekly partner hour sessions that couriers can attend to raise concerns they may have and requests drivers with problems to attend these sessions.

But with fuel prices at a record high, over 160p per litre, and looking likely to rise further, drivers claim to be beyond their breaking point.

Bryn Atkinson-Woodcock, 31, Treasurer for the IWGB Sheffield branch said: “We have had to force our way into this conversation, we actually had to meet with them and refused to leave”

“This is the fightback, it is our duty to push back and fight back.”

Though Sheffield was at the centre of the original strikes, 70 days in and the strikes have taken on a much more national scale, with solidarity pouring in. Middlesbrough, Dewsbury, Chesterfield and Sunderland have joined Sheffield with coordinated actions taking place around the country.

With over 900 donations pouring in, the IWGB Union strikes look likely to continue into the future.