Eleanor makes light of the darkness with ‘Subdural Hematoma’ 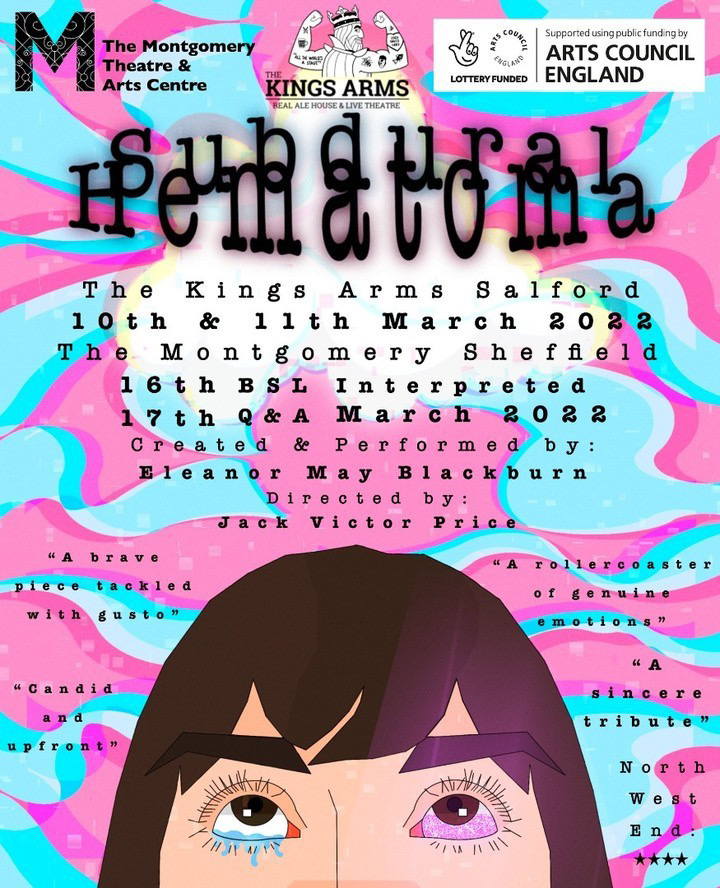 A 24-year-old actor and writer from Sheffield has taken inspiration from a traumatic accident to write her solo show ‘Subdural Hematoma’, which she will be performing at The Montgomery, Sheffield.

Eleanor May Blackburn suffered a brain bleed and stroke after being hit by a push-bike going downhill in 2015.

The near-death accident left her in an induced coma for two weeks, followed by a two- month stay in the hospital. Ms Blackburn has now almost fully recovered, but still suffers from nerve damage in her leg.

Ms Blackburn said: “I started writing [‘Subdural Hematoma’] for a module at university because I was still in recovery and wanted a way to deal with my trauma.

“It mainly consists of my mum reading diary entries that she wrote while I was in the hospital, and me responding to them in spoken word. There’s physical theatre, mask, verbatim and songs. It might make you laugh, cry, or both, and it involves a great deal of toilet jokes.”

While this is Ms Blackburn’s first solo show, she has held a passion for the performing arts from a very young age.

“I used to dress up and put on shows for my parents from around three-years-old! Eventually I did it with my cousins and charged them 50p for a ticket and had apple slices for refreshments in the interval. I just always knew I’d be a part of [the performing arts industry].”

Ms Blackburn has taken part in productions since her days in school, and went on to study acting at university.

She continued: “[One of my favourite performances] would be my second year final production of ‘The Laramie Project’ directed by Dr Misri Dey. I had to play five different American characters and have different accents for all of them.

“I love a challenge and this was the biggest challenge I could have asked for. I ended up with my highest mark for any university module and also assistant directed the piece.”

Besides acting, Ms Blackburn is also an avid spoken word poet, sharing her emotional pieces to her social media pages.

Ms Blackburn will be performing ‘Subdural Hematoma’ at The Montgomery in Sheffield on the 16th and 17th of March. Tickets can be purchased at themontgomery.org.uk .