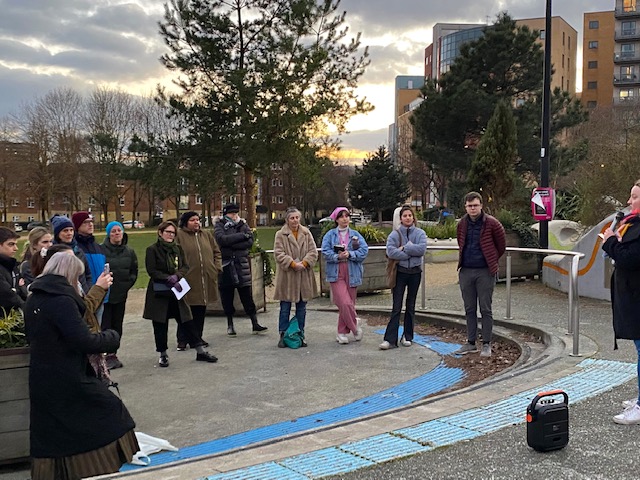 A vigil for victims of gendered violence was held in Sheffield to show solidarity for victims and to demand systematic change.

The Women’s Equality Party and Our Bodies Our streets united to create monthly vigils to honour the lives of the victims and to remember their names.

Isobel Thomas, 49, one of the organisers from the Women’s Equality Party said: “We want to keep shouting really loud and clear that we are not going to go away. It is unacceptable that this keeps happening and that we live in a society like this.

“It does not matter how many people come, it’s about highlighting the issue and making sure that locally this is something that is addressed.”

The data was taken from the Counting Dead Women project founded by Karen Ingala Smith to make sure these women are remembered.

The most recent vigil was held on Sunday 6 March at Devonshire Green in Sheffield, and saw members of the public and speakers expressing their feelings and experiences.

Our bodies our Streets is an organisation which was formed to tackle cat-calling in Sheffield, however has now progressed into wanting to make the entire city safer for everyone.

Evie Hairsine, 20, founder of our Bodies Our Streets said: “We need to get to a point in society where we trust each other. If you care about this then it’s your responsibility to do something.

“If you are a man you need to open up to criticism, and change your behaviour.”

Christine Rose, a five year member of the Women’s Equality Party, said: “We are doing something every month to try and put pressure on and progress this.”

More informatin on the next vigil can be found at the group’s instagram page @Ourbodiesourstreets.