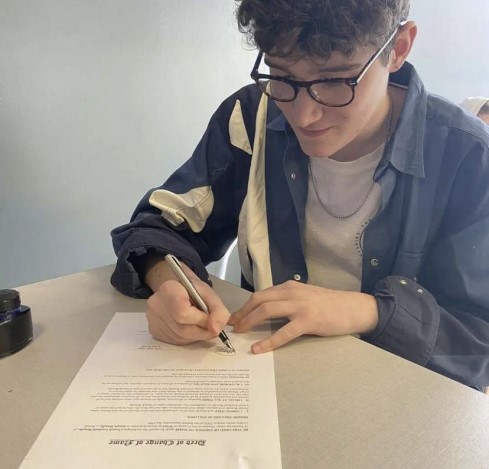 A Sheffield student has changed his middle name to ‘Leadmill’ after the steel city’s famous nightclub donated more than £100 to his fundraising poll.

Joseph Brindle, now Joseph Leadmill Brindle, from Wiltshire, raised £384.19 via an online poll which let voters select his middle name out of a choice of five options, as ‘Leadmill’ narrowly beat another lighthearted option of ‘Joseph Brindle’.

Mr Brindle, a politics student, said: “I decided I wanted to raise money for a local charity and as I walk past the children’s hospital on the way to uni most days, it was an obvious choice.

“I was pretty shocked when I saw Leadmill had donated £100, I feel like with a contribution like that they deserve my middle name.”

Mr Brindle is a keen activist, with a particular interest in environmentalism, attending events such as COP26 and protests in Glasgow with Green New Deal Rising, and has previously featured in The Guardian speaking on climate crisis classes.

Money raised will go to the Sheffield Children’s Hospital in Broomhill, a NHS Foundation Trust which employs over 3,000 people “to create a healthier future for children and young people”.

Liam Walton, Marketing Manager for The Leadmill said: “We thought this was an absolutely amazing idea when we came across the poll via social media.

“We thought it would only be right to help him gain a great middle name whilst supporting a great cause.”

The Leadmill is the longest running music venue and nightclub in Sheffield, and as well as this charitable donation, are supporting five charities this year including Sheffield Mind, Cavendish Cancer Care and Weston Park.

The venue hopes that via fundraising, awareness can be spread of what these charities do to help in various communities around Sheffield.

She said: “Joe’s fundraising is brilliant, we have never had someone change their name for us before so this is really unique and exciting.

“We love Joe’s dedication to the cause and every pound makes a difference.”

Joseph’s fundraiser has now ended but anyone wanting to donate to The Children’s Hospital charity should call 0114 321 2470 or email support@tchc.org.uk.