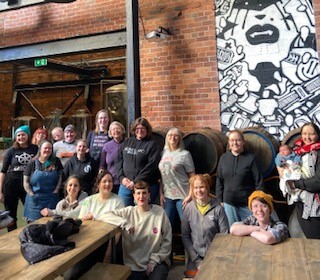 A Kelham Island brewery has brought together some of the region’s best female brewers to celebrate International Women’s Day.

The event aimed to boost the city’s hospitality industry after two years of Covid lockdowns and restrictions.

Prominent female brewers from the region created new beers at Heist Brew Co and the nearby Lost Industry Brewery for the event as part of the annual international event.

Rachel Green, a brewer at Heist Brew Co, said: “I want to bring in women who drink or know a little bit about beer to get interested in our local beers and show them what this is all about.

“I always go with the motto, ‘If you can see her, you can be her’, as it just shows to other women that there are women in beer and you can do it if you want to.”

The day aims to celebrate and amplify the voices of women in beer, including female brewers and sellers and all those involved in the beer making process who are underrepresented.

In the evening, a beer tasting masterclass was led by Joanne Love, Head Educator at Love Beer Learning and host of ‘A Woman’s Brew’ podcast, where she talked through professional beer tasting techniques and what to expect in those beers.

Joanne said: “Beer is still, even now, considered a man’s area. So being able to get all these women together and saying come, learn and chat is amazing and you realise this is a place for you, as a person who identifies as a woman.”

According to research conducted in 2018 by YouGov for Dea Latis, women only make up 17% of the UK beer market.

The beer industry is very male dominated and directed towards men, as beer is stereotypically perceived and marketed as a ‘man’s drink’.

Rachel Green, said: “When I got into brewing in 2019 I worked with a team of all men, so seeing other women in other breweries was inspiring and confirmed to me that I was on the right path.”

At the brew day, the women made an espresso martini white stout which emphasised their message that beer tasting and making can be creative and fun.

Frederica Moody, a bar staff member at the Coven/ Salt brewery, said: “Today proves that we can do it too. We can work in this industry and do the exact same job as a man, and maybe even make it better and more supportive.”