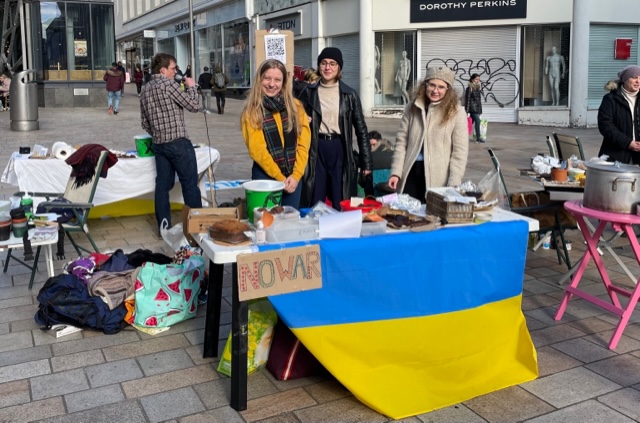 More than £690 has been raised for Ukrainian humanitarian aid charities by Extinction Rebellion Youth in Sheffield, organisers said today.

The fundraiser involved knitting, a bake sale, painting and potting sunflower seeds which are the national flower of Ukraine.

The event took place at midday at the Moor on Sunday.

“I think it’s so important that we show solidarity with them and use this time to reflect on other situations in countries where similar things are happening.”

To support the crisis in Ukraine, members of XR Youth recommend the public to sign petitions, share posts on social media and donate to charities.

The money raised by XR Youth will be going to The Ukrainian Red Cross, Sunflower of Peace and the Palianytsia Fund.

Miss Schooling also said: “We’re doing this fundraiser in solidarity for Ukraine. Most of us are from Extinction Rebellion Youth and we want to raise money with a nice community event for people to come along to.”

The stall involved a selection of vegan baked goods and signs saying “no war” and “I stand with Ukraine”.

Christopher Cullen, 19, a local resident said: “What’s happening in Ukraine is tragic and if we can help out whilst also growing a community in Sheffield then that’s fantastic.”

According to XR Youth members on Twitter, the event was organised in six days and was a great success.

Alison Stapley, 45, a local resident said: “To see so much support for Ukraine is amazing. Events such as these have a massive impact and it’s great to see young people join together to help others.”

Extinction Rebellion Youth Sheffield currently have over 200 followers on instagram and meet every Monday to discuss different issues and plan events.

The group previously have taken part in the Sheffield ‘Better Without Barclays’ week-long protest and the ‘Kill the Bill’ protest.