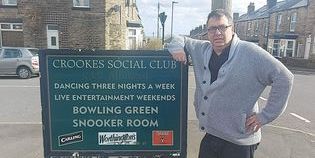 Crookes residents have contributed around three to four tonnes of donations for Ukrainian refugees in the last week.

Maurice Champeau, 53, the general manager for Crookes Social Club, is managing the contributions himself, with the social club staff assisting with storing the donations.

Mr Champeau said: “The first thing that triggered me to do it was watching the news; I felt helpless.

“I don’t tend to get into international campaigns like this, but I felt shamed into helping these people. They’ve done nothing wrong.”

He said: “The UK response to refugees is an absolute disgrace. Had we still been members of the EU, our doors would be open now.”

Donations currently being sought after include blankets, sleeping bags, children’s toys, pet food and long-lasting dry food supplies, like pasta and rice, amongst others.

Clothes donations are not currently needed due to being ‘inundated’ with them.

Mr Champeau estimates they’ve collected around three to four tonnes of donations, saying he’s ‘been overwhelmed by the public generosity’.

Mr Champeau with some of the donations.

He had had initially planned to send the donations to the Red Cross; however, they’re currently only accepting cash donations to aid Ukrainians.

He said: “I’ve got no way of getting these donations out to those who need them.

“I’m gonna rent a van and take them out there myself [to the Polish border].”

Mr Champeau plans to rent a van and travel to the Polish border in the next few weeks.

Donations can be handed in at any time during the week.

If you wish to donate to Crookes Social Club, reach out to them on Facebook. To donate to the Red Cross, follow this link.