Could you give this gorgeous ginger prince a home?

Benny is just one of the many cats from The Sheffield Cat Charity are in need of adoption – but the charity has suffered three break in as many months.

“People don’t realise how much it takes us to keep going, we rely on everything that comes through the door” said shopkeeper Ann Watson, 58.

Benny, the three legged cat, is one of the lucky animals that’s been put in foster care as they wait for a forever home.

He was born on an allotment with around 30 other feral cats, but discovered with leg caught in netting – and part of it had already come away.

A passerby freed him but he ran away before they could help him any more. 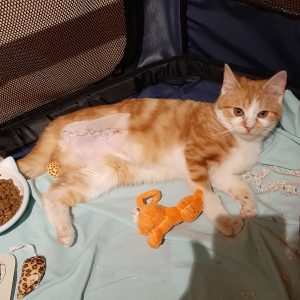 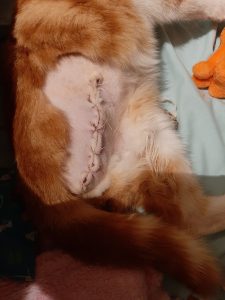 Benny was brought to The Sheffield Cat Shelter the day after he was trapped – but have to have his leg removed.

“He does have cat flu, but is getting on alright. He just has three different meds to have for now! His leg (or lack thereof) has healed really well, and he is not letting one less leg slow him down, he can still beat me down the stairs!

“We are taking it slow, but he loves us humans. He is so affectionate, he taps my legs in the morning so I pick him up for a cuddle, then he has his breakfast and comes back for more cuddles.”

Benny is around five months old now. He will be up for adoption once he is over his flu and has had a bit more socialisation.

Another kitty who needs a pick me up is Tony. He is another ginger and white mog, but far bigger than Benny.

Rebecca added : “Tony has been overlooked and passed over so many times by our potential adopters, for various reasons.  He’s affectionate. He is outdoorsy, he likes to catch presents for his owners, and he’s an independent chap. I sort of think of him as a bachelor, he doesn’t want to be tied down or cooped up, he wants to be out living life! But so far no one will give him a chance”.l

When it comes to kitties that have been rehomed by the Sheffield Cats Shelter, there are so many, it’s hard to choose!!