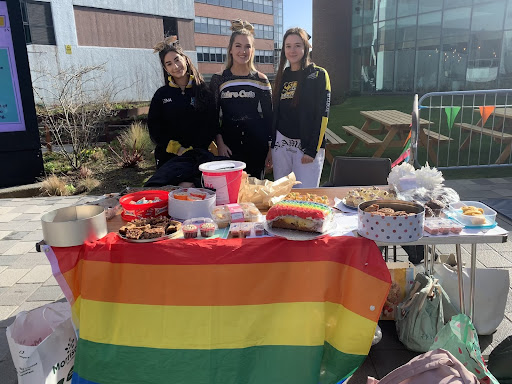 Food, music and a chance to try out a new sport were part of a charity LGBTQ+ event at Sheffield’s Student Union on Friday.

A bake sale on Friday was arranged by the University of Sheffield’s Stunt Cheerleading Club, the Sabrecats, who want to combat the misconceptions about tolerance in sporting communities.

Sena, a student at the University of Sheffield and a Sabrecat, said: “When we cheer people think it’s such a mean and unwelcoming environment and it’s important to show that’s not true, people can feel comfortable being themselves.”

The event was organised as part of the University’s LGBTQ+ committee’s efforts to celebrate Pride History month which has seen karaoke nights, club nights, sports sessions and bake sales.

Celia, another Sabrecat, said: “We’re lucky that we’re in quite a liberal country but that can always change.”

The recent attacks on Ukraine have sparked concerns about the future of LBGTQ+ communities in Ukraine, as the Russian government has infamously anti-gay policies.

These include the 2013 law against ‘gay propaganda’, and a history of ‘gay purges’, with activists and members of the community going missing and being imprisoned, tortured and killed.

There are fears of these practices being extended to Ukraine, especially after a letter from the US Representative to the Office of the UN was leaked that discussed the potential targeting of groups including LGBTQ+ communities.

Fellow Sabrecat Rebecca, who was also at the event, said: “It’s all about progress and speaking up.”