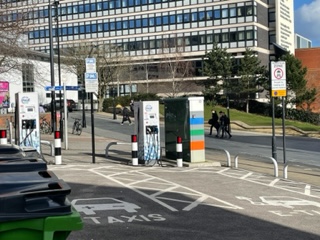 A new green scheme will see taxi drivers allowed to borrow electric cars for up to four weeks, with only a £250 refundable deposit.

All of the LEVC taxis will have wheelchair access to help give the drivers a full hands on experience of an electric whilst being cheaper to run than diesel.

Councillor Terry Fox, Leader of Sheffield city council, said: “Refuelling is cheaper and higher for the environment’’ he also believes that there are huge benefits to switching to electric taxis.

Taxi drivers will also be given a £50 free charging on the council’s 10 taxi – only fast charging points. These will recharge the taxi to up to 80% battery capacity in 45 minutes.

The council will be working with Sherbet, an electric taxi firm which currently operates 500 electric taxis across the country.

Hackney Carriage cab driver Hathrf Ali, 40 said: “Having an electric taxi working throughout the city will have a huge impact on our business.”

The scheme is funded by way of the government’s Early Measures fund for lowering air pollution.

Caitlin Allen, 18, an architecture student, said: ‘’I use taxis very often therefore I feel like they need to be safe for the environment.’’

However she said she thought it would be best if taxi fares did not rise as a result of the scheme.

Sheffield City Council has said it hopes this will kick start a rapid acceleration in Sheffield’s migration to electric vehicles.

Despite Sheffield being one of UK’s greenest cities out of 10,385 charging locations in the UK Sheffield only has 33, equating to 0.3% of the UK’S charging infrastructure.

Speaking about the ambitious plans, Arnie Sing, Managing director of city taxis, Said: ‘’ I am very excited. I want Sheffield to have the first-electric taxi fleet in the UK.”

Douglas Johnson, Executive Member for Climate Change at Sheffield City Council, added: ‘’ Electric taxis will complement different measures throughout the town to wash up the air and scale back carbon emissions from an important and essential part of Sheffield’s transport techniques.’’