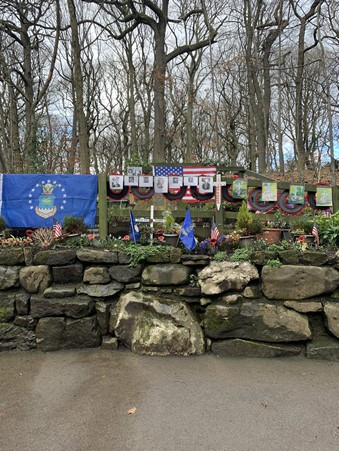 Endcliffe Parkrun has organised a commemorative event to mark the 78th anniversary of the Mi-Amigo aircraft that crashed in the park during the Second World War.

Parkrun organisers have encouraged runners to wear red, white and blue, or Stars and Stripes, on Saturday 26 February to commemorate the crash.

On 22 February 1944, Lt John Kriegshauser crashed in Endcliffe Park, after his B-17 Flying Fortress, nicknamed ‘Mi-Amigo’, had been damaged.

Only of the four engines was operational and the pilot made the choice to crash instead of attempting to land on a group of children in the park, killing all ten men on board.

Tony Foulds, 84, who was one of the children in the park on the day of the crash and has devoted his life to tending to the Mi-Amigo memorial in Endcliffe Park six days a week, will start the Parkrun.

He said: “I killed those lads, no one can ever tell me any different.

“If it hadn’t been for us in the park, they’d have lived to a ripe old age.”

Mr Foulds appreciates the support of Parkrun and has said that the event is “smashing”.

Pierre Laubscher, from Endcliffe Parkrun, organised the event, as well as creating a flyer and Spotify playlist with USAAF, RAAF and other military music to raise awareness of the crash.

He said: “What we want is for people to turn up in red, white and blue, to raise awareness because it’s clearly a sacrifice for these people who were in their young twenties.

“What their sacrifice led to has given us the freedom to stand here.”

Louise Dale-Hughes, 53, event director at Endcliffe Parkrun since 2019, urged runners to wear their red ’50 Parkruns’ T-shirts and said that runners should give “a really big shout out or clap as they run past the memorial.”

The 5k run, as usual, will set off at 9am at Endcliffe Park.

A small observance was held yesterday at the memorial in Endcliffe park by Mr Foulds to remember the aircraft crew.