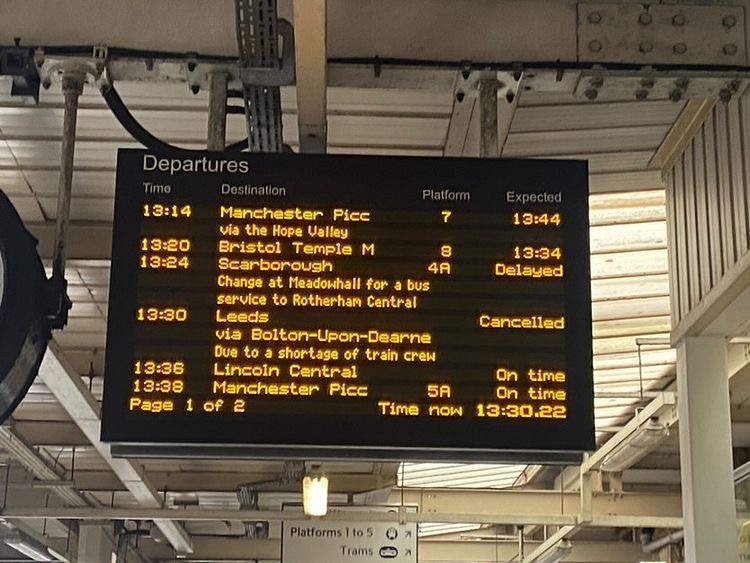 Train operators have warned of train disruption because of the aftermath of Storm Eunice, leading to potential delays and cancellations for passengers.

On Friday, the West Coast Midlines were damaged by the strong winds from Storm Eunice. Passengers have been advised to not travel down this route until the damages are fixed.

And today, the Sheffield Station train workers are under immense pressure with the storm as the delays and cancelations have led to ongoing complaints by customers who are demanding refunds.

A rail service worker at Sheffield station, has said: “The storm has really impacted my job as it is causing me constant stress with the number of delays and cancellations.

“At the end of the day, this is my job and I understand the customers concerns and doing the best I can to issue these refunds.”

Sheffield has received a yellow weather warning as forecasting suggests that the city will be expecting up to 55-60mph winds during this week.

Passengers who are planning a train journey from Sheffield station to enter Scotland are expected to receive cancellations due to further risks of debris landing on the train tracks.

Sheffield station have increased the amount of trainline workers on sight to respond to issues quickly, as there is expected to be heavy rain heading to South Yorkshire, causing more disruption for the railway.

Further delays and cancellations have been occurring this week including train journeys to Manchester and Leeds, receiving delays up to two hours approximately.

Harry Dyer, 22, a passenger taking the train for the 13:14>14:32 to Manchester, was concerned when he found out that the train was delayed by 1 hour and 48 minutes.

He said:” I have work today, so I may miss my connected train.

“One of my friends planned to travel to Leeds today and turned up to find out that the train got cancelled.

“This storm is just as bad as the pandemic.”