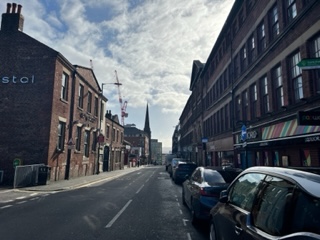 Two suspects, age 22 and 24, were arrested and later released under investigation after a 19-year-old man was stabbed at around 4:15am on Saturday morning.

The street, often regarded as the ‘Sheffield strip’ due to the number of bars and clubs in such a close proximity, has a reputation for late night brawls.

Student Abby Robinson, 19, who works at Walkabout on Carver Street said: “Working on Carver Street especially through to the early hours of the morning is becoming more and more frightening as violence like this is happening almost every weekend.

“It really terrifies me knowing there are people right outside who are capable of such horrific things and it makes me anxious about leaving work.”

Whilst the victim was later released from hospital, the incident has raised concerns that more could be done to ensure that Sheffield’s streets are safe.

Rowan Smith, 18, who works at Freshman Vintage on Carver Street said: “If you’re on your own, you don’t feel safe anymore.

“Compared to some places I’ve visited in cities like Manchester, which do intense bag searches, you get absolutely nothing here.”

Many nightclubs have attempted to implement stricter measures after incidents have occurred in the past, such as metal detection on entry, bag searches and sniffer dogs, but these intense procedures never seem to be long lasting.

A student who didn’t want to be named, who frequents West Street and Carver Street on a weekly basis, said: “During the height of the spiking protests, they had very rigorous checks on the door but as times has gone on they don’t seem to be as concerned anymore, which makes it seem like it was all just for show.

“It doesn’t come as a shock to me to find out that yet another stabbing has taken place.”