“I could strangle them ” : Vandals target Hillsborough cat charity shop for the third time

Hillsborough residents have been left disgusted after vandals smashed into a charity shop for the third time in months.

A facility worker doing the weekly bin changes found The Sheffield Cats Shelter on Langsett Road broken into at around 5.30am on Sunday morning.

Shopkeeper, Ann Watson, 58 from Burn Cross Road has said “He rang me at around 5.32am to tell me the shop had been broken into. I threw my clothes on and saw him straight away. I called the Police soon after.

I felt sick, frustrated and angry. If I could get a hold of them, I would strangle them!”

The shop had only just been repaired from the last two break ins, which both happened just before Christmas. The repairs cost around £13,000 of fundraised money.

She added: “The window was smashed and there was glass hanging out, the door was ajar. They took the collection jar and broke into the safe. They took all the cash from the safe which had Thursday, Friday and Saturday’s takings. 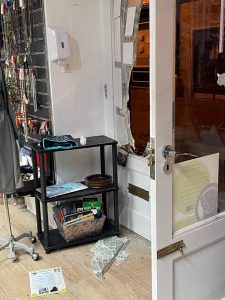 People don’t realise how much it takes us to keep going, we rely on everything that comes through the door. Its little old ladies that keep us going, Hillsborough has such a sense of community. There’s a couple of rough sleepers that look out for us and we will give them sleeping bags. It’s disgusting that people ruin that. It’s such a slap in the face.”

The charity manager, Sarah Smith, 51 from Archer Road has said “You just can’t imagine who would target a charity, its heart breaking for all the staff that put in so much time and effort… this is really going to set our rescue back again”.

The Sheffield Cat Centre managed to rehouse 15 cats from the same home just before Christmas, all had various health issues. The charity also raises money to help get sick cats the veterinary treatment they need, such as Benny, a (now) three legged ginger Tabby who was found with his leg in netting. 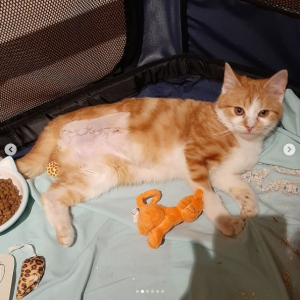 The shop are now looking for donations, both in the form of cash and goods to sell in shop, to help keep them afloat.