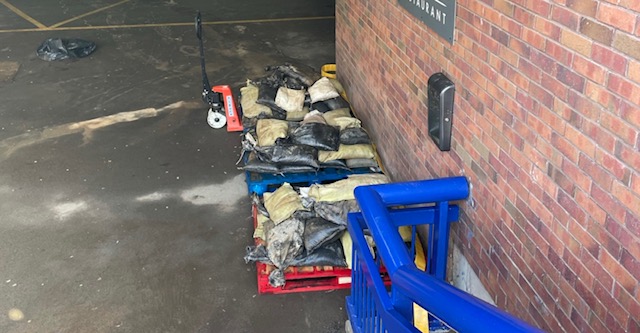 Rising levels of the river Don have been causing damage to the open air concourse below Wednesday’s South Stand.

Sandbags were placed along the perimeter of the lower concourse walls on Sunday evening by stewards, following heavy rain from storms Dudley and Eunice.

A steward, said: “I came here this morning and there was a bit of flood damage, but nothing too bad, I think we’ll be okay”

Postponement could be detrimental to the club’s good form, with the Owls most recently beating Doncaster 3-1 away from home, the first time the team have come from behind to win a game in over 6 years.

Sheffield Wednesday’s League One game against Fleetwood tonight is postponed due to storm damage to Highbury stadium, which sparked fears of the same occurring at Hillsborough.

Fleetwood stated that due to the high winds of Storm Franklin, structural damage has been caused to their Parkside stand, making it unfit for purpose.

A spokesman from the Environment agency said: “River levels have risen as a result of heavy rainfall…consequently, flooding of property and roads is imminent, with the first property expected to flood being Hillsborough Stadium.

The owls most recently fell foul of flooding in 2019, but also famously saw their pitch submerged underwater during the Sheffield floods in 2007.

We reached out to the club for a comment on the damage and potential postponement of games at Hillsborough, although they did not reply.