Outrage at ‘dangerous’ litter filling up streets of Sharrow 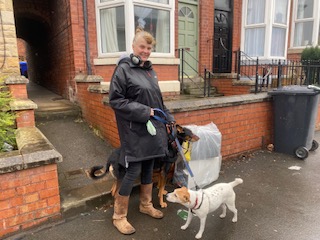 People living on Vincent Road said feel that “local groups must take over” when it comes to litter management following a continued increase in rubbish in the area.

Carissa Honeywell, Vincent Road, who has lived there for 10 years said: “I think people really feel it on this street, it’s just difficult to know what the cause is.

“I mainly worry for the dogs, they will eat anything and they could become ill. There are also loads of kids who walk this way to school, it’s dangerous.”

Residents say several complaints have been made to Sheffield Council about the litter all over Sharrow and Nether Edge in the last few months, yet nothing has been done to resolve the issue.

Dr Honeywell said: “It never feels like there has been much funding here, even things like those sweepers. I’ve never seen one of those on this street, ever.” 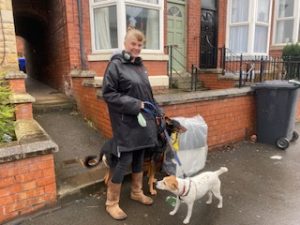 Carissa Honeywell with her dogs on heavily littered Vincent Road

Vincent Road and South View Road were identified as the “worst offending” streets for litter in the Sharrow area in the most recent local area committee by councillor Peter Garbutt.

Coun Garbutt, Green Party councillor for Sharrow and Nether Edge, said: “The funding situation for Sheffield City Council is pretty dire at the moment but that doesn’t mean we’re stopping taking action. We’re doing what we can.”

Residents have to rely on volunteer groups like ‘Love Our Streets’ who “gave up waiting for the council” to clean up the streets.

Helen Ward, of Priory Place, a member of the Love Our Streets group since lockdown said: “The days are long, long gone that the council had money to spend. We all need to contribute, as long as you can help, you should.”

“Love Our Streets” organise litter picking groups and involve the community through their Facebook page.

They recently set up an “adopt a street” scheme which allows people to choose a street to litter pick which shows up on their map.

Writing on Facebook, Jus Pettifar, one of the founders of the group, said: “The idea behind Adopt a Street is the cleaner they stay, the less litter gets dropped.”