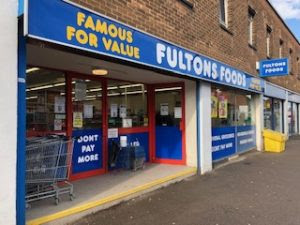 Families in Crookes have been left disgruntled at the disappointing news of Fulton’s Foods branch closing down.

After the good news in October 2020 that Poundland would be converting the Crookes Fultons Foods store into a Pep&Co, it was then announced at the end of last year that the conversion would no longer go ahead, and that the Crookes branch was set to close down.

Jean Yellot, 70, said: “I think it sad because we’re losing such a lot of the small shops. I know the restaurants and the shops are nice but, for basics, there’s nowhere to just get bits and bobs.

“When I first came here you could get anything. Shoes, ladies shoes, clothes, everything you wanted you didn’t need to go to town. Now it your staples, your supermarkets, now Prices is closed, that’s another one to go.”

Poundland announced in their statement that multiple Fultons Foods branches would be closing down across Sheffield, posing questions for the investment being made into the city as a whole.

Ms Yellot added: “There’s a lot of online shopping now, and I must admit I’m one that does online shopping. Since we went into covid, older people like myself have learnt how to do it.”

Valerie Brock, aged 86 said: “There was consternation amongst everybody because its really a key shop, its much more key in price wise than either the Coop or Sainsbury’s. But they don’t have a full range.

“You don’t expect it really from the kind of cheaper shops. Please keep Fultons, don’t let it go.”