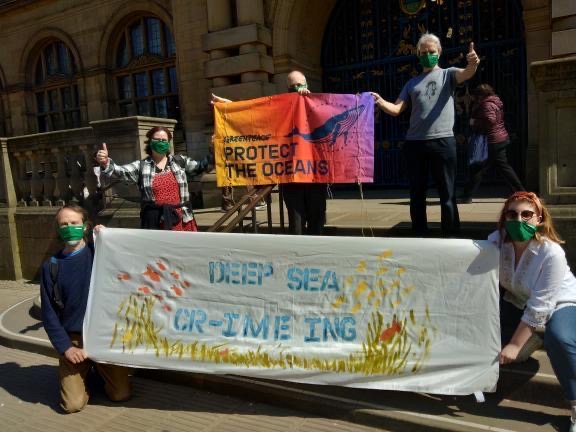 A nationwide protest against deep-sea mining took place in Sheffield during the weekend as part of a global campaign organised by the environment group Greenpeace.

The protest took place on April 24 and 25 in the city, where volunteers were seen marching with homemade banners through Sheffield’s most known areas like the City Hall, the Cathedral, Crucible Theatre and Winter Gardens.

The protest was organised by the environment campaign group Greenpeace, which are calling on the UK government to put out a strong message in the negotiations calling for 30 per cent of the world oceans to be protected as an oceans sanctuary and say no to deep sea mining.

As part of a global campaign against plans to “rip” up the ocean floor for profit, volunteers from cities like Sheffield, Manchester, Cardiff, York and Southampton joined their local protests calling for the UK Government to ensure that the oceans are off-limits to deep sea mining.

Louisa Casson, ocean campaigner at Greenpeace said: “The health of our oceans is closely linked to our own survival. Unless we act now to protect them, deep sea mining could have devastating consequences for marine life and humankind.”

Deep-sea mining causes damage and disturbance due to sediment pollution, noise and light to the ocean’s ecosystems, which could make climate change even worse than it already is by releasing carbon stored in deep sea sediments. Obtaining more by digging up the ocean bed causing irreparable damage to nature and the deep sea is not the way forward.

According to Greenpeace, what is needed is a change from exploitation of resources and potential destruction to a circular economy, which can be achieved by reducing the amount of minerals and metals used in new products by investing in research and development and recycling for reuse.

A few governments and companies have already been granted licences to explore for deep sea mining in ecologically sensitive waters. However, for now, deep-sea mining isn’t happening anywhere in the global oceans.

In order for people to join protests or gather more information, Sheffield Greenpeace hosts meetings every second Monday of every month via Zoom. The next meeting is on May 10 where they’ll be discussing the deep-sea mining campaign success and planning for deforestation campaign against Tesco.