Anti-Asian sentiment and violence have long existed but surged globally in recent months.

300 percent more hate crimes against Asians were reported in the UK from January to April in 2020 compared to 2019, according to UK police data.

An Asian woman, her boyfriend and their pets were brutally attacked by a family when taking their pets for a stroll in Brooklyn, New York.

The cat Ponzu died when the 12-year-old boy from the family pulled the cat’s leash up into the air and stepped on the leash when Ponzu tried to get away, resulting in its death. 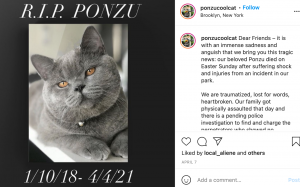 The caption on a post on Ponzu’s official Instagram read: “We are traumatized, lost for words, heartbroken.

“Our family got physically assaulted that day and there is a pending police investigation to find and charge the perpetrators who showed no empathy for animals nor humans.”

Between March 2020 and February 2021, nearly 3,800 cases were recorded, according to Asian American Groups.

Some netizens believe China is at fault for Covid-19 but were unable to distinguish a country and its people, so the Chinese suffered when they meant to criticize the Chinese Communist Party and not the Chinese.

Steve Cohen, 71, the chairman of the US House Judiciary Subcommittee said: “Anti-Asian hate did not begin with Covid-19 pandemic, and will not end when the pandemic is over. All the pandemic did was exacerbate latent anti-Asian prejudices that have a long, long and ugly history in America.”

“It also provides an excuse for some to act on those prejudices.”

A report shows that hate crimes against Asian-Americans in 16 US cities rose by nearly 150 percent from 2019 to 2020.

Many people commented online that it shouldn’t take massacres for people to start waking up to the longstanding Anti-Asian racism.

Some Asian-Americans were prompted by the attacks to learn self-defence to further protect themselves when being attacked.

In the UK, groups such as Racism Unmasked Edinburgh and End the Virus of Racism have channelled efforts into reporting mechanisms.