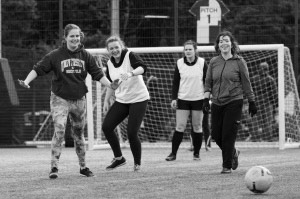 More than £1,000 has been raised for food banks across Sheffield by the inclusive and fast-growing community club Football for Foodbanks.

The organisation is made up of volunteers setting up football games despite declaring themselves “pretty rubbish” at football, and “welcoming players that are not very good with open arms”.

Since January, the Men’s division has grown by about 50% with about 150 returning players, and the Women and Gender Minorities division has doubled to 140 members.

Matty Cassell, 30, youth justice worker and founder-director of Football for Foodbanks, said: “There’s a big need for food, not just in Sheffield but in the whole country.

“The thought of people waking up to empty cupboards in the morning is quite upsetting really; it’s something that’s close to my heart.”

FFF was formed when his 5-a-side team had money leftover from players even after paying for pitch hire and equipment, and decided to do a food shop and donate it.

Now, people of any ability are welcome to play matches by contributing £4 or food donations, or £1 for those receiving Universal Credit, which is rounded up and donated at the end of the month.

Alice Rhind-Tutt, 23, biophysics PhD student at the University of Sheffield, now plays in the Women and Gender Minorities division which she set up after going along to a friend’s match to make up the numbers.

“We’re trying to foster a bit of community and a bit of fun … I think with lockdown people have been feeling a bit antsy at home, and are just looking for any chance to go out and do something a bit different.”

The group adapted to the November lockdown by organising “fitness for foodbanks”, raising nearly £700 for Spires Foodbank in Arbourthorne by collectively walking 2,500km.