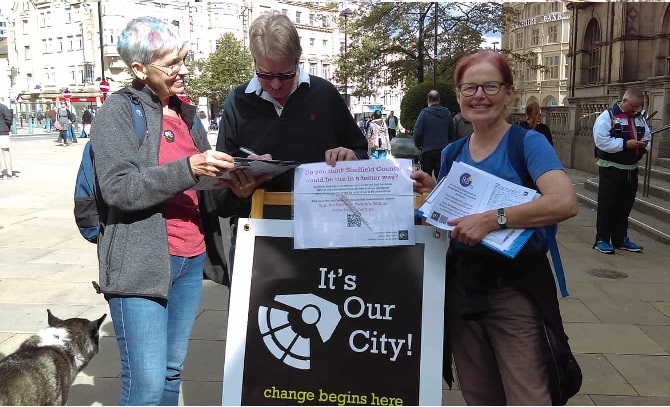 Eighty-five percent of candidates standing for local election support a proposed change to council leadership which will see a committee system instead of the current ‘leader and cabinet’ model.

Under the Localism Act 2011 this vote is legally binding, after a petition by the pressure group It’s Our City achieved over 26,000 signatures, more than the 5% of the electorate required to trigger such a referendum.

This would be a major change from the current strong leader and cabinet system, where the leader of the Council chooses nine cabinet members from their party to make the majority of decisions.

Anne Barr, co-chair of the group, said: “Our vision is a committee system with cross party cooperative working, community representation and local and national expert input as and when called for.

“What could be better than that? All pulling together for the best that we can get for Sheffield.”

More than 90% of the people they spoke with agreed to sign the petition to try and change the system.

All candidates standing next month were contacted about their position on the referendum by It’s Our City, a politically independent group who have been campaigning for three years for the move to a modern committee system.

Councillor for East Ecclesfield, Andy Bainbridge, not listed as supporting the change, said: “I think people who understand the nuances will carry the day as they’ll vote for the committee system, whereas most people aren’t bothered or don’t understand it.

“It’s difficult for me to explain it to them because I don’t understand either – but nobody has asked me.”

Regardless of the referendum result, Local Area Committees voted through last month will be set up in an attempt to devolve some decision-making responsibilities to smaller communities.

Ms. Barr said: “We need both, a change of government structure and things like the LACs.

“It’s Our City are feeling cross about them choosing the word committee because it muddies the waters a bit, when the committees they are talking about are nothing to do with governance style committees. It’s almost like an election stunt.”

If more than 50% of voters vote in favour of changing to the committee system, the council will be forced to change, and the city would be the largest one to do so since the Localism Act was passed in 2011.

The referendum is due to be held on 6 May.