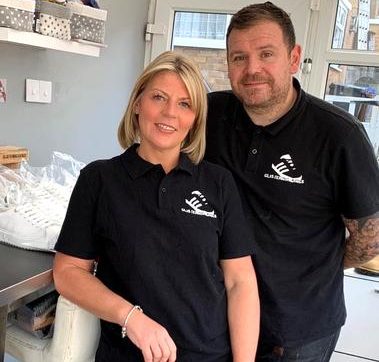 A couple have turned their lockdown passion project into a full time job as they prepare to open their new shoe restoration shop, Glistening Kicks, in Sheffield.

Phil Ridley, 42, from Sheffield and his wife Rachael Ridley, plan to open the shop on Saturday 24 April on Chesterfield Road.

Rachael, said: “It’s been a whirlwind of a year, something I never thought would happen but thankfully it has. It’s great trying and succeeding to get to the dream that Phil had just over a year ago.”

The store will be providing a footwear restoration and cleaning service with a personal touch, shoe painting, suede re-dyeing and the option to add a custom design.

It all started when Phil’s son wore a new pair of his father’s trainers to work and came back with them looking filthy, so he decided to have a go at cleaning them himself.

He researched how to do it and “got a buzz” from seeing the results. From there it became a hobby and Phil offered to clean some of his friends trainers for them and posted about it on twitter. It continued to grow until he was cleaning two to three pairs of trainers a week. 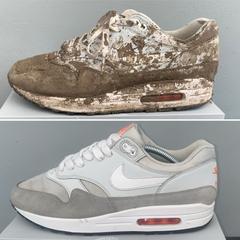 At the start of the first lockdown Phil was furloughed and then ultimately made redundant from his job. This gave him the freedom and time to learn more about shoe restoration and the opportunity to further advertise the business. It grew to the point of a full time job for him and his wife and now they are on the verge of opening their first shop.

Phil, said: “I went from cleaning two or three pairs a week as a hobby for friends to cleaning 30-40 pairs a week every week for people from all over the country, I’ve even sent trainers to Dubai.

There’s a community with trainer restorers and it’s really good as we support each other and help each other a lot. Now I’m becoming a validated business in that regard I am finding that there a lot of businesses in the city that are more than happy to help and give advice and support in that regard as well.”