Hundreds of Sheffield protestors demand the government “Kill The Bill” 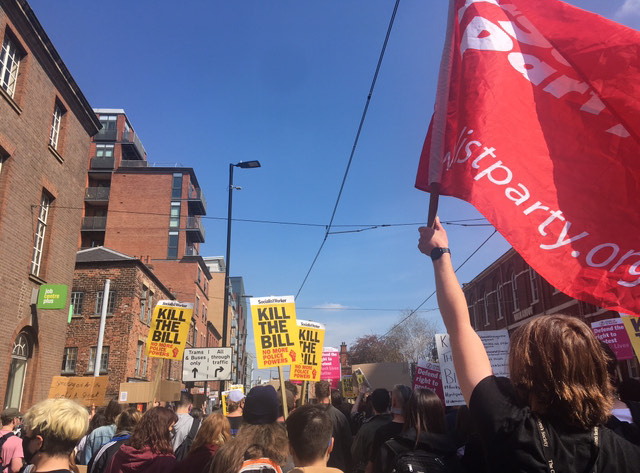 Over 400 impassioned demonstrators marched through Sheffield city centre this Saturday to defend their right to protest.

The protestors staged a sit in outside the Snig Hill Police Station and congregated outside the Crucible Theatre where the World Snooker Championship was being televised.

Leaders of the protest called on demonstrators to: “Shout until they can hear us on TV”.

The crowds shouted chants such as: “This is what democracy looks like” and “No justice, no peace, no racist police” and many protestors held up placards which read: “Defend the right to protest, Black Lives Matter” and “Kill the bill, no more police powers”. 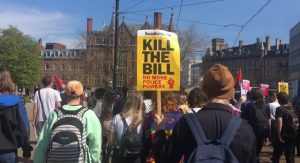 The protest was surrounded by police officers both mounted and on foot much to the anger of the protestors.

Despite this animosity, the protest remained peaceful throughout.

Sheffield Against the Policing Bill planned the demonstration in line with a National Day of Action for Kill the Bill protests all across the country.

According to Sheffield Against the Policing Bill, the bill will limit the right to peaceful protest, enhance stop and search powers, criminalise trespass and target the way of life of Gypsy, Roma and Traveller communities.

Olivia Blake, MP for Sheffield Hallam, said the bill: “does more to protect statues than women” and called to: “Stop this draconian, dangerous and discriminatory legislation”.

Mrs Blake, along with tens of local organisations, has signed an open letter calling on Sheffield citizens to publicly oppose the bill.

Protestors on Saturday included members of the Sheffield Anti-Fascist Network, Sheffield Extinction Rebellion and Socialist Appeal, as well as many non-partisan supporters.

Emily Price (19), a student at the protest, said: “Even as someone who had never protested before today, I feel very strongly that everyone’s right needs to be protected. I’d like to know that in the future, if there was something I felt passionate about, I’d have somewhere to take my anger and frustration”.

This lively demonstration was the third held in Sheffield so far and was mirrored in multiple cities across the UK including Oxford, Cardiff, Leeds, Aberystwyth, and Bristol. 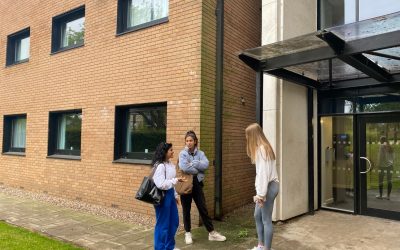