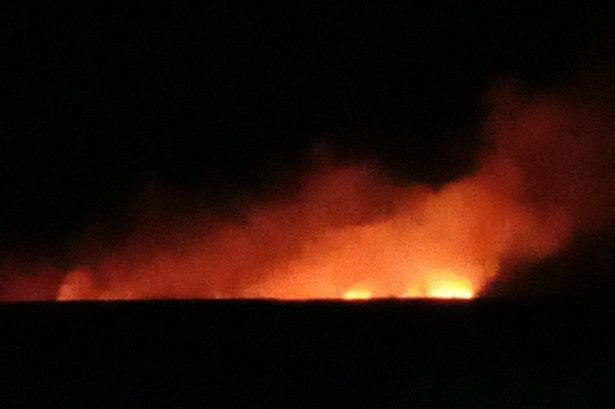 Firefighters fought a large fire in the moorlands on Saturday night after disposable barbecues were left by peak district visitors enjoying the sunny weather.

Farmers and gamekeepers assisted fire teams in tackling the blaze, with 6 fire crews needed to help tame the fire, which occurred on council controlled moorland off Ringinglow Road in Sheffield.

In a statement on Saturday night, South Yorkshire Fire and Rescue Service said: “Crews are expected to be at the scene for most of the night.”, highlighting the extremity of the incident. The fire was put out by the morning, after it became apparent that the fire had been caused by discarded disposable barbecues.

In a message on their Facebook page, the Peak District Moorland group said: “A quick response is needed to prevent these fires escalating into something bigger, along with the equipment and experience afforded from the estate team.”

“This yet again highlights the need for “fit for purpose” fire mitigation in our moorland areas.”

Moorland gamekeepers, local farmers and 4 fire crew extinguished another wildfire last night on Sheffield Council controlled moorland. A disposable BBQ was thought to have been the cause. @SheffCouncil @PeakChief @robertlargan pic.twitter.com/vpcCtquSVA

Barbecues, disposable barbecues or any form of open fire and flame are not currently permitted anywhere in the Peak District where there is open countryside.

Speaking on the issue of barbecue-initiated fires in the Houses of Parliament, High Peak MP Robert Largan said: “I pay tribute to the Derbyshire Fire and Rescue service and the peak district moorland group for their efforts in fighting these fires, but it is very frustrating that they are forced to respond to so many fires, usually caused by disposable barbecues.”

“Can I urge the Government to do more to educate people on the countryside code, so that visitors to the peak district know how to protect and respect our beautiful countryside?”

In March this year, South Yorkshire fire and rescue service announced a new batch of off-road vehicles to allow greater access to moorland fires. However due to a training period which will last a number of months they are not yet in use, meaning that crews like those involved on Saturday are still restricted in their battle against the fires.