Drastic increase in litter during lockdown 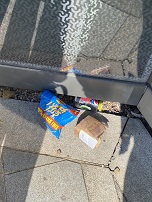 Sheffield has seen an alarming increase in litter over the most recent lockdown.

Throughout this pandemic, cleanliness is most peoples top priority but we have seen a shocking increase in rubbish littering the streets. In one of Sheffield’s park seven tonnes of rubbish was removed by the council after mass group gatherings.

A study by In Your Area found that four in five people feel that littering is worse now than it was before lockdown and 70% said that they consider littering to be a serious issue where they live.

In the past year we have adapted to washing our hands more often, using hand sanitizer and wearing face masks. In this survey 90% of respondents said they have seen disposable face masks littering the floor with 87% of people saying that they wouldn’t feel comfortable picking it up and putting it in a bin.

Psychologists find that people are more likely to litter in places that already contain litter than cleaner environments. If more time and effort is put into clearing out spaces that are highly littered then littering will decrease.

To help with this we have seen more people doing their bit to clean up their city. The Sheffield Litter Pickers is a volunteer collective, made up of groups and individuals from all over Sheffield who are committed to keeping their communities clean.

Their Facebook group described as a central point for Sheffield folk to share information about litter picking activity, has 3.3k members.

Sheffield City Council supports litter picks and can provide equipment such as litter grabbers, plastic bags, disposable gloves and will take away the bags of litter that you have collected.

They advise litter pickers that litter can only be removed from pavements, verges and adjoining public land. Once collected it should be bagged and tied securely.