Cyclist knocked off his bike in hit and run 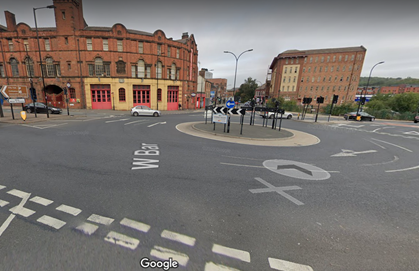 Sitwell cycling club have released CCTV footage of one of their members being knocked off their bike on a notoriously busy roundabout.

Cyclist, Chris Hague, was hit by a car in a hit and run on West Bar Roundabout. The CCTV showed no signs of the car attempting to slow down or stop after the cyclist had been hit.

Police are trying to identify and find the vehicle responsible.

A statement was made by Chris’s cycling club, Sitwell Cycling Club, on Twitter.

It said, “On Monday 15th February at 7 am club member Chris Hague was hit by a car on West Bar Roundabout in Sheffield whilst commuting to work.

“As you can see from the footage the driver did not attempt to stop. This has been reported to South Yorkshire Police.

“Chris is fine all things considered. Few cuts and bruises but nothing serious. His bike took most of the beating.”

Cyclists being caught in accidents like this happens frequently. Statistics published by the department for transport states that in 2018, 99 cyclists died and 13,744 were slightly injured.

Helen Royles-Jones had a similar experience on the roundabout and tweeted, “Those cycling on West Bar roundabout take care, on there this am with bright flashing lights x2 but they mean nothing when drivers don’t even bother to look out before flying out! Grrr.”

She said in a interview, “My view is that it’s a dangerous roundabout for drivers, cyclists and pedestrians. The approach from Corporation ST and West Bar Green are too fast and often drivers aren’t willing or able to give way.

“As a cyclist although I haven’t ridden to work for a while now due to lockdown, I would avoid that roundabout completely.”

As a result of the accidents, Sheffield City Council is changing the roundabout to dutch style, which ultimately will be safer for both pedestrians and cyclists.

A dutch style roundabout is designed to force drivers to reduce their speed as well as include cyclist lanes to avoid accidents like these.

If you have any information about the car or were in the area please contact Sitwell Cycling Club.