“Selfish and irresponsible”: Police crackdown on illegal off road bikers 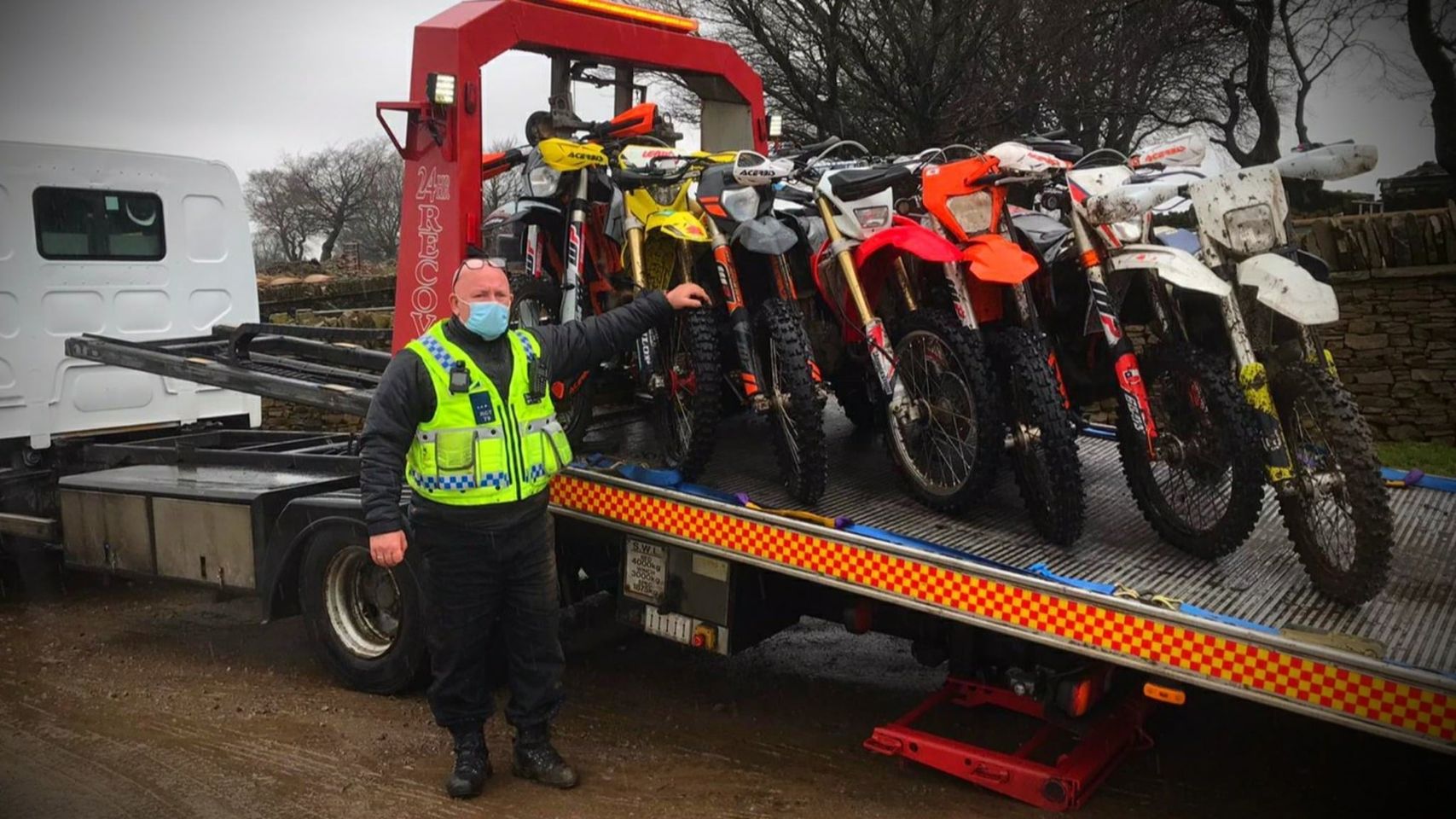 Professional off road bikers were among those who had bikes seized when police responded to 75 reports of illegal off-road biking in Sheffield North and a huge gathering of illegal bikers around in Doncaster East in the past week.

Police issued 50 fixed penalty notices for Covid-19 breaches when up to 70 bikers were reported in an area of wasteland in Hatfield, close to the M18 and surrounding fields over the weekend.

The South Yorkshire Police Off Road Team carried out an operation with Doncaster East Neighbourhood Policing Team and Doncaster council after weekly complaints from local residents and MPs about the regular use of the notorious site.

Steve Dormer, a retired professional engineer from Conisbrough, said: “We’ve lived here for about two years now, one of the reasons was to retire to a nice quiet part of Doncaster and everyday you hear this intense noise from these bikes riding through the woodland area.

“I don’t want to be a killjoy, but you’re sitting there, certainly in the summer, nice quiet day and all of the sudden these things start up and it is so annoying.”

The operation saw between 50 and 70 bikes and quads being used at the site at one time. Altogether 24 bikes were seized, 30 riders received anti-social notices and 50 people received fixed penalty notices for breaching Covid-19 regulations.

The bikers are also causing damage to Sheffield’s green spaces.

Dave Aspinall, the Countryside Service Manager at Sheffield City Council, said: “A lot of the motorbikes can damage the woodland floor, so there is an issue about the damage to our green spaces and our habitats that we manage.

“It’s been an issue that’s been in existence all my working life and it’s been a challenge for most local authority countryside services all this time. I held a conference in Rotherham about 30 years ago about off road motorbiking and it was a major problem then and it’s still one today.”

Police said as well as bikers making noise disruption to the surrounding areas, people using the site left piles of litter on the road leaving people living nearby to clear it up.

Roads Policing Sergeant Matt Duffy said: “Communities have raised concerns about the area of wasteland being used by off-road bikers and despite our efforts to issue warnings, riders have continued to ignore these and cause a nuisance.

“We understand people’s love for the sport but riding must be done in a legal and safe manner.”

The Off Road Team also carried out an operation in Sheffield North on 21 February which led to 77 incidents being reported in one day. This saw the seizure of two motorbikes belonging to pro riders in the sport of enduro. Both pro riders had no insurance, with one additionally having no insurance and no number plate.

Chairman of the Auto Cycle Union Ltd, Roy Humphrey, said in a statement: “Considering that the country is still in a national lockdown, it really is disappointing to see and read that this sort of irresponsible behaviour is taking place and that it has been highlighted so much on Social Media.

“The ACU do not condone the actions of these individuals and as such we are fervently working with local police forces of South Wales and South Yorkshire to identify the perpetrators to take action against them. This will most likely be a suspension on the individuals licence which will prevent any competitive action for some time.”

The union also said that motorcycles being ridden illegally brings the sport and the ACU into disrepute, describing the behaviour as “selfish and irresponsible”.

The ACU is an internationally recognised national governing body for motorcycle sport in Britain representing 23,000 license holders, 550 member Clubs and also issuing up to 4,000 motorcycle sport permits each year.

South Yorkshire Police said the site in Doncaster East is illegal to for riders to use and signs have been put up warning them of the consequences however this doesn’t seem to have deterred any of the bikers away.