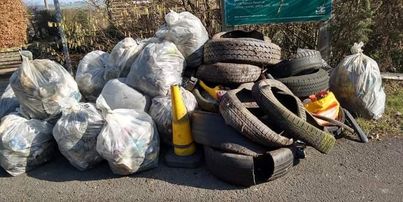 A volunteer group of 12 collected almost 30 bin bags of rubbish from a road near Woodhouse in just two hours on Sunday.

The group, S13 Litter, is one branch of Sheffield Litter Pickers, a network of volunteer community groups clearing up litter across the city.

Andrea Kay Cook, 59, retired, a member of S13 Litter from Bishop Hill, said: “That area down by the tip is absolutely horrific, just awful. I get a bit disheartened sometimes.

“Without the volunteers, litter would be up to the sky.”

Another nearby group nicknamed ‘Gleadless Valley Gangstas’ have recently cleared a motorbike, along with 100 bags of rubbish in the past two weekends alone.

General litter picking does not fall under the councils’ responsibilities, though specific incidents of it can be reported on their website.

A spokesperson for Sheffield City council said: “The council supports these groups because they’re keeping the city clean, and without being too rude, they’re doing it on the cheap.

“We could never keep the streets of Sheffield as clean as everyone wants it. Who could afford to do that?”

Amey plc, a company which provides infrastructure support services, is responsible for roads, pavements, street lights, and highway trees in Sheffield under their private ‘Streets Ahead’ contract with the City Council.

The council spokesperson added: “These volunteer groups are going out and tidying a piece of street that otherwise, Amey would have to tidy.

“I’ve always thought they get supplies on request, because they’re saving Amey money. If I was Amey, I’d say great, here are all the grabbers and gloves that you want.”

Fix My Street, a website that forwards complaints about litter to the council, received 53 reports of rubbish problems on Sunday alone, including the 28 bags and tyres gathered by S13 Litter. The City Council has dealt with 99,288 reports to date.

Mrs Cook said the council no longer sweeps the roads or gives gloves and grabbers to volunteers, recently only giving them bin bags, but is good with collecting picked rubbish reported on Fix My Street within two to three days.

Volunteers are calling for improvements including cutting back areas of bushes and trees so that they can access rubbish more easily, and longer opening hours for waste disposal sites.

Waste disposal sites across the city including the one on Beighton Road are now operating on shorter winter opening hours, although longer hours were kept up in September and October to tackle long queues.