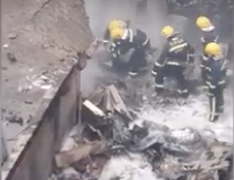 A plane crashed into houses in Jian County, Jiangxi Province, killing five people and injuring one when carrying out a cloud-seeding operation.

All five crew members on board died and one of villager suffered minor injuries when the plane crashed, according to the weather bureau of Jiangxi Province,

Chen Guodong, 43, a villager who lived near the incident site said that it was raining when he and other villagers noticed that something was wrong with the plane.

He said: “I heard continuous noise from the plane, it circled in the air for a while, we watched in horror as the plane crashed to the ground and hit the houses.”

The crash damaged a total of three houses owned by local villagers. One was set on fire, the fire has now been put out. The crash happened at 3.19pm on Monday, 1 March.

Cloud seeding is when planes disperse chemicals in the atmosphere to cause rain. It is used in the area to help agriculture.

The plane was a B-10GD which belonged to Great Northern Wilderness General Aviation Company.

Authorities in the area have now launched an investigation into the cause of the accident.