A Sheffield environmentalist has said more needs to be done to tackle the cities “parking pandemic” after the recent winter snow has led to an increase in dangerous parking.

Graham Turnbull, from Ecclesall, was prompted to take action when his wife showed him a picture of a car parked on the pavement in the snow, next to a double yellow line on Cemetery Avenue. 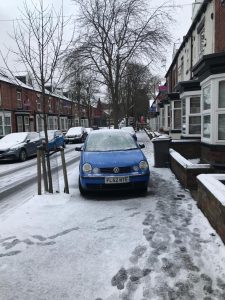 The 53-year-old founder of the Clean Air For Sheffield campaign said: “Sheffield has two pandemics, and parking is one of them.

“Parking Services do not care that there are cars on the pavement here. They actually don’t have the powers yet to do anything about this. It’s illegal to drive on pavements but not to park.”

Sheffield’s Parking Enforcement Services said that where yellow lines are covered, it is difficult for the council to prove the driver has knowingly parked on the yellow lines.

Officers have to provide evidence that the vehicle is illegally parked in the form of photographic evidence which cannot be obtained when the lines are covered.

Mr Turnbull said: “As a parent of young children, we have regularly been driven at by cars and vans trying to park on the pavement in this area – it is almost as if they don’t see us.

“With more people travelling by foot, wanting to avoid public transport in the pandemic, we need to more clearly define the boundary between car space and people space.”

Police also cannot enforce fines to people parking on yellow lines, but only to vehicles that are obstructing or driving on pavements.

Senior civil enforcement officer for Sheffield Council said: “I understand the customer is angry that we could not enforce these vehicles, but we will always attend an area when the weather has cleared, and the lines are visible to ensure the vehicle has been moved.”