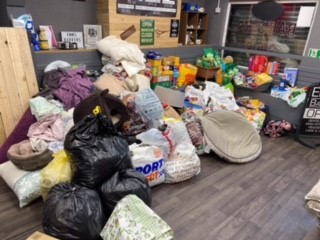 Sheffield’s branch of the RSPCA has nearly hit its £500 fundraising target to repair damage caused when part of its ceiling collapsed.

The RSPCA Sheffield Animal Centre also recently saw its underfloor heating break down and an outside pipe burst.

Charity volunteers Emma Lee, and Lisa Bows set up a fundraising page in support of the branch which has now raised £410.

Miss Lee said: “The impact of the ceiling collapsing and the underfloor heating breaking has been huge, and means any spare cash they had for food and other things had to go on the building.”

The RSPCA Sheffield Animal Centre is an independent charity which receives no money from the main charity body to help with maintaining the centre, therefore relies upon funding.

Following the ceiling collapse, the shelter took to Facebook and said: “We really could have done without something like this as we are still trying to raise the funds to repair our underfloor heating.”

According to the shelter the leak which caused the ceiling to collapse has now been fixed, but they still need someone to provide quotes for the repairs needed.

There are several ways in which the public can help the shelter. Miss Lee said as well as donating cash people could help by donating things they have in their homes. She also cautioned people not to take on pets without serious consideration.

She said: “Don’t have an animal in the first place if you are not fully committed to it or can’t look after it the way it should be. A lot of dogs have mainly been given up over lockdown as owners are too busy when life goes back to normal, and the shelter is worried this will happen again after this one.”

Chief executive of the RSPCA, Chris Sherwood said: “We’re all used to being able to buy whatever we want when we want it but we’re urging people to thoroughly do their research before committing to getting any dog.”

Miss Lee added that the shelter has collected some cash which is good but the target items have been better.

The shelter asked on their Facebook post whether there were any companies in Sheffield that could help them.