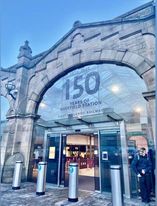 The direct railway link from Sheffield to Manchester airport could be scrapped in a new consultation proposed by transport bosses.

The train from Sheffield to Manchester airport is a very busy service, and its termination will affect holiday-makers in particular. Whether travelling for leisure, business or education without a direct link many Sheffield residents and visitors will struggle.

Chris Heaton-Harris, Rail Minister urges passengers to vote on the three possible railway proposals, two of which involve scrapping the airport link completely. The new consultation focuses on improving railway performance for its passengers but its proposal has caused outrage for many Sheffield residents who feel Sheffield is constantly penalised by the railway service.

Sheffield resident Daniel Sharpe, said: “We’ve tolerated unacceptable road links between the two huge cities for years. Why not shaft us further by reducing the rail service too. Utterly scandalous.”

Sheffield’s leader of the Liberal Democrats, Councillor Shaffaq Mohammed, posted about the issue on his personal Facebook account where he encouraged Sheffield residents to vote to keep the railway link. This post was shared to a group for local residents ‘Sheffield Online.’ That post received an enormous amount of responses and activity, gaining over 300 comments within a week and over 100 shares.

Councillor Shaffaq Mohammed said: “Whether it be for work or leisure, this train line is essential for a lot of people in Sheffield.

At a time when we need to do all we can to push people to greener forms of transport, scrapping this direct link to Manchester Airport risks pushing more people back into cars.

I know from experience that this train line can be extremely busy so I’d urge everyone to fill the consultation in and make your voice heard.”

The travel industry has already taken a large hit due to the repercussions of the Coronavirus pandemic and by demolishing many residents main form of transport to their closest major airport, the industry is likely to suffer even further. This also has negative environmental consequences as by eliminating the only source of pubic transport to the airport it is forcing more people into having to travel by car.

The government consultation is due to end on March 10th and the final outcome will be implemented in March 2022.