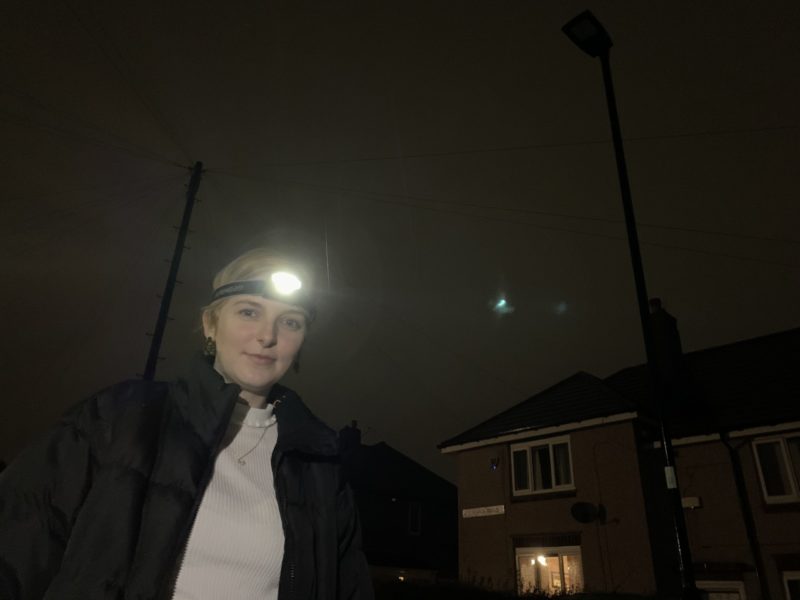 A two-week power outage that saw the loss of streetlights in Arbourthorne has come to a heated contention between power distributor Northern Powergrid and a Sheffield City Councillor.

The blackout left residents angry and nervous, with power lost to lights on Aylward Road, Aylward Close, and Northern Avenue.

This prompted an investigation by Sheffield City Council’s Street Lighting Team on 3 February that found a fault in the underground network owned and operated by Northern Powergrid.

Cllr Sophie Wilson later went out and inspected the area herself by headtorch.

She said: “Residents need to know there’s a light at the end of the tunnel. It’s been over two weeks since Northern Powergrid was made aware of this fault and it’s not acceptable that it hasn’t been prioritised and fixed.

“This is a commercial firm that recently made over £123 million in profits. We want them to put people before profit and fix the issues. It’s just not acceptable that residents feel scared to walk down the street at night because their streetlights don’t have power.”

However, Northern Powergrid refuted the comments about their profits and stated the figure used by Cllr Wilson was incorrect. They also reported that Cllr Wilson did not contact them directly.

They explained power was shut off in the area before work began to address a complex fault in their network and carried out a full permanent repair from 3 to 9 February. They communicated this to the Street Lighting Team, and requested the team contact them if there was further issues.

Northern Powergrid said they were contacted yesterday to be advised the council was sending a team to check the streetlights, and offered to send a member of their own team. The streetlights were restored that evening.

In reply to Cllr Wilson’s comments, Northern Powergrid also said: “As the company that manages the network that power peoples’ lives we take this responsibility very seriously, investing around £1m every day on managing, maintaining and improving our network.

“Over the past 15 years some 95% of our profits have been reinvested to support our current £3bn investment plan to improve our network for our customers.

“Our expert teams remain committed to ensuring we provide safe, reliable electricity to the customers and communities we power.”