The Lights are off – How have Government Restrictions Impacted Sheffield’s Nightclubs?

In the wake of the government’s decision to close all Nightclubs, huge obstacles have been placed in front of the Industry. Benji Holland explores the restrictions enforced, and the aid being provided to this important sector.

The rain is pouring, the wind blowing. It’s minus 1 degrees outside, but you don’t feel a thing. Arm in arm with your best friend, you trudge along the moonlit pavement, dodging deep puddles that could ruin your night. Now the distant drone that you followed has become a cacophony of chaos, filled with shouting, music and laughter. You join the back of a long, winding queue stretching down the street. Excitement and joy is everywhere.

Now, with dark lifeless streets, boarded up windows and shutters down, Sheffield’s once vibrant and dazzling nightlife is a thing of the past. The lights have gone out. The Coronavirus Effect.

On the 20th of March 2020, Prime Minister Boris Johnson ordered the closure of all nightclubs, as well as gyms, cinemas, leisure centres and theatres. The effect of this decision had huge impacts on venues all across the UK, especially Sheffield.

The previous ‘normal’ was now just a memory.

The biggest problem facing venues was the direct loss of income through the closures. A furlough scheme was immediately introduced by Chancellor of the Exchequer, Rishi Sunak.

The scheme allowed venues to get a grant from HMRC to cover 80% of the wages, who had been “furloughed” and unable to work. It also covered backdated payments from March 1st onwards.

However, the threat of liquidation to the majority of venues in Sheffield still remained very likely without any other support.

On the 5th of July, the government revealed a £1.57 billion pound support package, named ‘The Cultural Recovery Fund’ to provide grants to eligible businesses as a response to the restrictions caused by COVID-19. The Fund supports what are known as ‘Cultural Organisations’ These are businesses that work for the preservation or promotion of culture. Examples include places like; Art Galleries, Music Venues, Theatres and Museums. Firms that apply for a grant are sorted into one of nine categories that include Dance, Literature, Museums and Visual Arts. Music Venues come under the category of ‘Music’.

Corporation, on Milton Street, received a massive £398,400, allowing the firm to pay it’s fixed costs whilst its doors are closed for the foreseeable future.

The Leadmill also received a £241,571 grant from the scheme, which Liam Walton, Lead Promoter described as “A significant amount of money, and a massive boost for us.”

Aside from government help, donations have been pouring in to save some of the city’s more iconic venues. The Leadmill is one of Sheffield’s most Iconic Venues. With a rich 40 year history, it has hosted hundreds of famous bands and artists from across the world, such as Oasis, The White Stripes, The Kings of Leon and The Stereophonics. During The Height of the Pandemic in August, a very famous fan of the venue reached out, to prevent any harm coming to a place close to his heart. Alex Turner, frontman of the Sheffield Rock Band, Arctic Monkeys, donated his fender guitar to be raffled, in a prize draw. The raffle ended up raising over £125,000 pounds for The Leadmill. 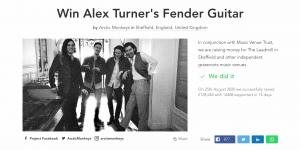 In addition to this, local fans of the Leadmill have come together to give what they can, to prevent the loss of this landmark of a venue from the city. This has been achieved through the sale of Leadmill branded merchandise, as well as through live streams in which viewers can donate to the cause.

Procedures inside Music Venues and Nightclubs in Sheffield have also drastically changed in the wake of COVID-19 and subsequent government restrictions.

In all Tiers, Nightclubs and Dance Halls have to remain closed. However, across the country, in Tier 1 and 2 areas, many Nightclubs managed to stay open by operating essentially, as Bars. They offered Socially distanced seating, with table service. Music was played in the background as people sat, drank and chatted.

However, the government did introduce some particular rules that were at the centre of backlash from many. The venues were not allowed to play music over 85 decibels, except for live performances. In addition, venues were told to “take all reasonable measures” to prevent singing and dancing. “Basically, if we broke any of the rules, it would get shut down, so we had to be strict.” Said Adam Fear, a bartender at Code Nightclub.

There is much speculation as to the reason singing was not permitted, with some suggesting that the risk of COVID particulate transmission is much higher when shouting or singing. However, many agreed that such rules were “Draconian” with some comparing them to George Orwell’s dystopian novel, 1984.

The safety of staff working in venues also became a big concern. Adam explained his experience working in this environment. “We were told throughout, if we felt ill, not to worry about calling in sick. They wanted us to be more cautious with it, than risk it. So from a Code perspective, I couldn’t ask for much more safety wise.” Code also encouraged staff that were self isolating to take up to an extra week off, after the end of the period as a precaution.

Whilst the pandemic affects the businesses themselves, it also has huge personal implications on those that not only work at the venues, but also those who regularly attend events.

“I’ve found it very mentally draining and mentally tough” said Liam. “Fortunately, the team here at Leadmill have been amazing at pushing people through it. We’re all here for each other.”

“The end is kind of in sight, and that’s wha you’ve got to focus on. We’ve just got to stand together, stay strong and get through it.”

Liv Harrison, a regular visitor to the Leadmill, explained how she depended on the venue to spend time with her friends, as “a getaway from the serious lifestyle through the week”. Here she explains what the Leadmill means to her. “It feels like a second home. If it was ever to shut down, I think Sheffield would loose one of the greatest places it’ll ever have. You can go anywhere, and ask a stranger, 110 percent they’ve probably been in the Leadmill, or heard of it. It’s that Iconic.”

Not all venues in Sheffield have been as lucky as places like Corporation and The Leadmill. Some smaller, more ‘niche’ venues in the city have struggled to gain funding, or secure grants from the government schemes. Plot 22 in the city centre, and Dryad Works in Kelham Island are two examples. However, a story of comradeship has emerged from what could’ve been a dire situation for the venues, as The Leadmill has generously pledged some the donations it received from its fans in support, preventing them from closing down for good. Speaking about the two struggling businesses, Liam said, “They’re amazing venues, with a wide range of events and they aren’t receiving the help that they need. We’re just trying to help give them a bit of a boost.”

Hopefully these selfless injections from this larger, more stable business will allow the two venues to continue to stay afloat in these deeply uncertain times, until one day, they can open their doors once again. Elsewhere, venue managers across the city have been talking amongst themselves, giving help and advice to one another.

“It’s brought all these places together, which is great, and long may that continue past the pandemic.”

It is certainly unclear when Nightlife will resume once again in the UK, and whether things will ever go back to ‘normal’. However, in the wake of the new vaccine, hope may be in sight for this industry under immense pressure.