More cars damaged due to over-crowding in residential car parks 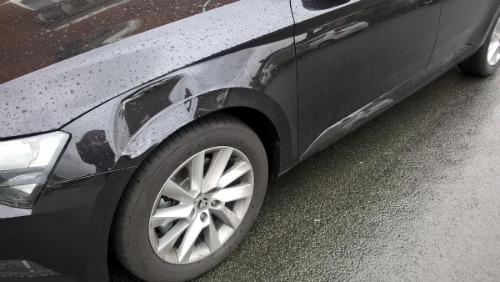 A car was crashed into whilst it was parked in the Erskine View residential car park in the Arbourthorne area of Sheffield, last night.

There are just four small car parks and only three secure garages for residents to use in the area.

The council run car park has recently become overcrowded, with residents having to park their cars on the road due to the lack of spaces.

Adam Gillott, 22, whos rental Skoda Fabia was damaged said: “This is the second time in just as many years where my car has been damaged due to just being in the car park. The other year my car was completely totalled after some kid crashed into it.

I started parking my car there the other year after it kept getting broken into on the car park up on Erskine Crescent. There is just nowhere safe for me to leave my car.”

The car park on Erskine Crescent has suffered a great deal of crime over the last couple of years. Cars have been vandalised, frequently broken into and stolen. This has prompted residents to park their cars elsewhere.

South Yorkshire Police reports have said, 40 vehicle crimes, including collisions, have been reported on the Arbourthorne area between March 2016 and April 2017. A further 342 incidents of criminal damage, including vandalism, were reported in the same time period.

Of these crimes reported, 66% have resulted in no further action by the police due to the lack of witnesses and evidence.

Roy Parker, 67, said: “My car has suffered a lot of damage over the last couple of years, even though it is always tucked away in the corner. I just cannot afford to keep getting it fixed. This car park never used to be this busy, but people are having to park down here, rather than running the risk of parking it near the field.

We’ve complained to the council about the lack of safe parking around here, but nothing has been done.”